Stand up, speak out, and send the House a message: Vote yes on FOSTA+SESTA package

Congresswoman Ann Wagner's (R-MO) bill, H.1865, Allow States and Victims to Fight Online Sex Trafficking Act (FOSTA) is being brought to the House floor early next week. The bill, with an amendment from Congresswoman Mimi Walters (R-CA) that includes victim-centered provisions from S. 1693, the Stop Enabling Sex Traffickers Act (SESTA), sponsored by Senators Rob Portman (R-OH) and Richard Blumenthal (D-CT), will help give those who've been trafficked online through sites like Backpage a pathway to justice. This bipartisan package will clarify that Section 230 of the Communications Decency Act (CDA) does not prevent states and victims of sex trafficking from pursuing justice against the sites that knowingly facilitate trafficking.

We're very close to passing historic legislation that will help those who are trafficked online. And we need your support to get it done. 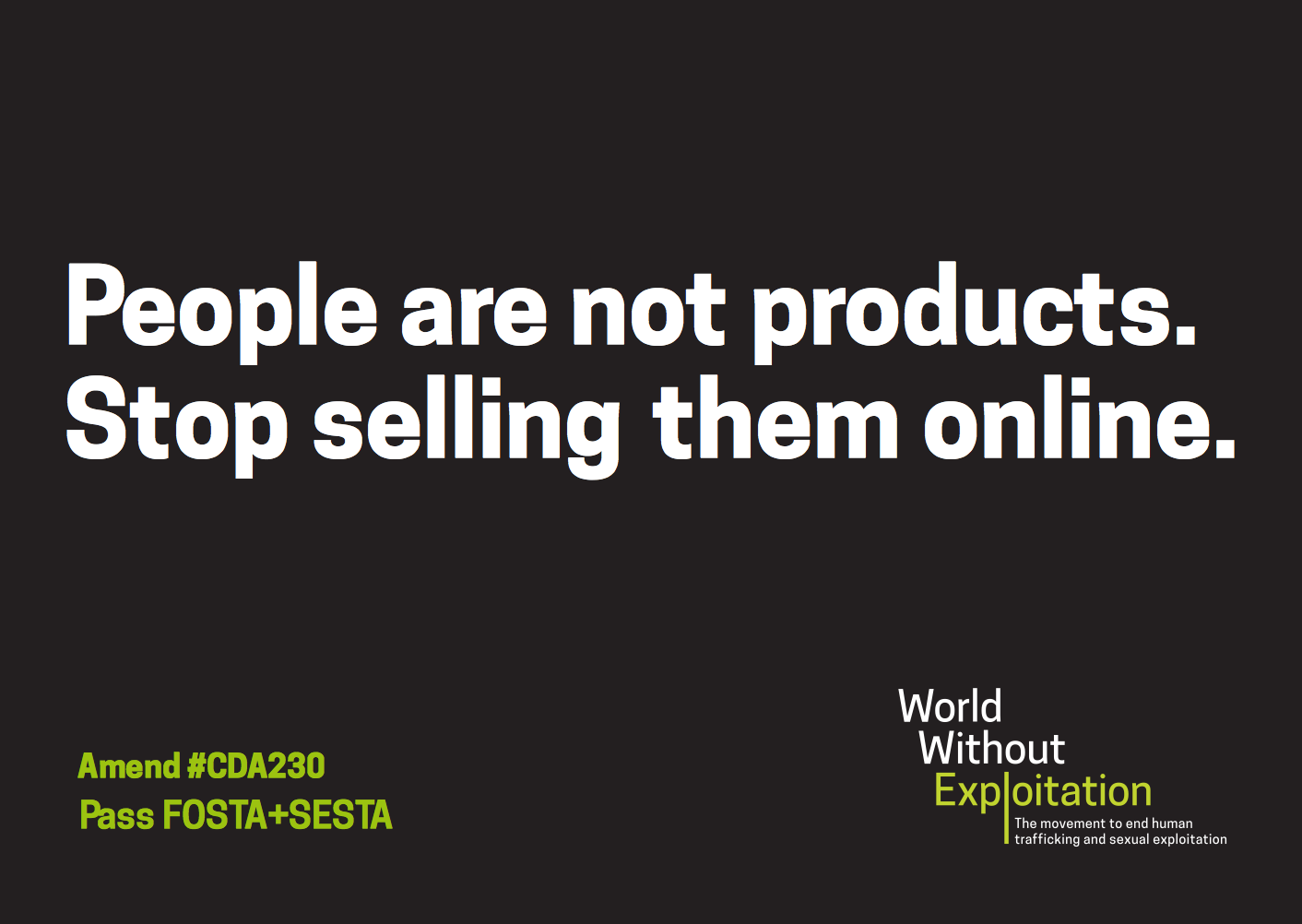 As organizations and leaders in the movement to end human trafficking, we want to thank you for scheduling this important floor vote on H.R. 1865, the Fight Online Sex Trafficking Act of 2017 (FOSTA), originally introduced by Representative Ann Wagner. The need for legislation to clarify Section 230 of the Communication’s Decency Act (CDA) is urgently needed given the 1st Circuit ruling in Doe v. Backpage. That ruling held that even if Backpage had participated in the crime of sex trafficking, Section 230 shielded the company from the claims filed by child victims. We greatly appreciate the support of all of the bill’s co-sponsors who fully understand the barriers Section 230 has created in the ability of state law enforcement and survivors to seek justice against websites that are engaged in facilitating human trafficking.

To that end, we would like to express our strong support for the crucial amendment being offered by Representative Mimi Walters to the underlying bill that will specifically address the Section 230 problem. Representative Walters’ amendment is critical to stemming the tide of online human trafficking. Importantly, in its ruling, the 1st Circuit Court recommended that child victims seek a legislative remedy to this problem — and the children have done just that. We are thrilled that the Internet Association (IA), has not only endorsed H.R. 1865, but also its Senate counterpart, S.1693, the Stop Enabling Sex Traffickers Act of 2017 (SESTA) introduced by Senators Rob Portman and Richard Blumenthal. Representative Walters’ amendment mirrors the SESTA legislation that currently has 67 bipartisan Senate co-sponsors.

Assuming the Walters’ amendment is adopted and there are no additional amendments added that would weaken these measures, we strongly urge the House to pass this package and send it to the Senate.

We thank you for your leadership in bringing this important legislation to the floor for a vote. As survivors and advocates dedicated to eradicating human trafficking, we are grateful for your commitment to ensuring that websites that knowingly facilitate sex trafficking will at long last, be held accountable for their actions.